The latest news from Martin Dixon Ltd – our work, our people, our success.

The money has been split - £7,308 each – between Dove House Hospice and Life for a Kid. 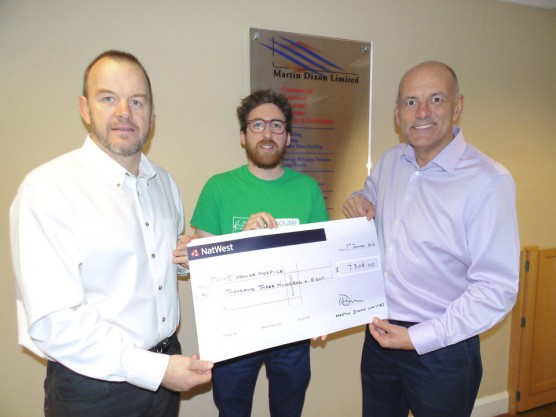 And with all sponsorship pledges now collected, Mr Dixon handed over the cheques in a ceremony at the mechanical, electrical, gas and renewables specialist’s head office in Anlaby.

Martin Dixon Ltd has worked closely with Dove House Hospice over the past 18 months, having forged a close relationship after the company was employed to install a new solar PV and heating control system at the charity, a system which has greatly reduced running costs.

It has also long supported Life for a Kid, as Martin’s son Kirk, who used to play rugby for Hull FC and last week announced his retirement from the sport to work for the family business, is an official patron.

The Hull-based charity supports children under the age of 16 by offering funds and equipment to help them lead a better life, and also helps support children who require life-saving or life changing operations.

Both charities were overwhelmed by the final amount raised, and were full of praise for how the Martin Dixon team had not only gone the extra mile – but 160.

The money takes the total raised by Martin Dixon for Dove House Hospice to around £17,000 in recent years, and Jethro Shearring, fundraising coordinator at the Hospice, said such support was crucial. 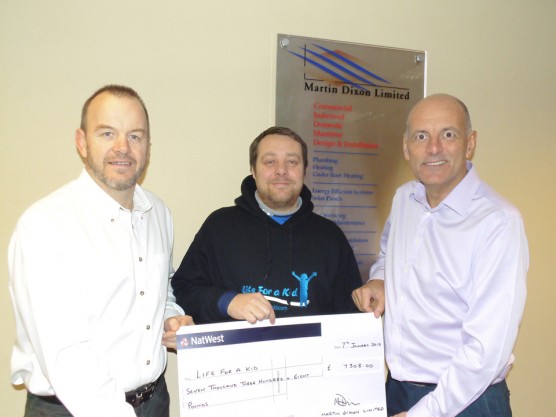 “It costs us around £6.5m a year to run the Hospice, and it is only through the fundraising efforts of companies such as Martin Dixon that we can continue to support and care for people with life-limiting illnesses,” he said.

“What the team here did was absolutely amazing and well beyond what many people would be prepared to do in the name of charity, and we obviously can’t thank them enough.”

Dean Hoggard, head of operations at Life for a Kid, said the money will enable the charity to complete a new sensory room, which they are now looking to open by the end of the month.

“To bike that far for charity is amazing. They have gone through the pain to raise this money for us, and it is an absolutely incredible amount to us,” he said.

“As a charity we always like to show people where their money goes. Nothing will be spent on administration, it will all go to supporting children, and this will allow us to fully kit-out our new sensory room and open it by the end of the month.

“The team from Martin Dixon will be invited down to see just what they have done for the children we support.”

Money was also raised for both charities through a golf day and gala dinner which was also arranged and hosted by the business, and owner Martin Dixon said he had been delighted to support the two charities, and with the support he and his team were given.

“It was without doubt a difficult challenge for us, but the thought of being able to support both Dove House and Life for a Kid, and raise a lot of money for each of them, kept us going for the full 160 miles,” said Mr Dixon, who established the business 30 years ago.

“I’d like to thank my team here for agreeing to the challenge, and of course completing it, but mostly to all the people who put their hands in their pockets to either sponsor us for the bike challenge, or be involved in the golf day and dinner, to raise such a tremendous amount.”

Back to News Articles

Martin Dixon projects we are involved in we find that the quality of there workmanship is excellent and we rarely find any snagging items. Their employees (on site) are very approachable to discuss the works they are undertaking and have great knowledge of the project in hand and services they are installation.

Martin Dixon Ltd were brilliant. They stood out ahead of all other firms we looked at across the country as they could offer us the complete package. It was great to use an established local company with the expertise to deliver this for us, and throughout their time on site they were superb. Financially, the savings and extra income will allow us to run the school for a year at no cost to us.

I was introduced to the work of Martin Dixon at an awareness raising meeting organised by the local NAHT Association. They installed LED lighting throughout the school. The work was promptly carried out during the summer break of 2015, we are delighted with the results. I would have no hesitation in recommending Martin Dixon as a company to fulfil what they promise.

After just having had our LED lights fitted in school this week, I just wanted to get in touch to say thankyou to Martin Dixon for the work you did. All lights are now changed making a massive difference to the lighting within our school and hopefully to our electrical costs! Many thanks for the level of service that you have given us.

Our Latest News See All News

When you need electrical help in Hull, then you deserve the best. That’s why we’re here. Our family-run business has over 30 years of experience with all your electrical needs. You won’t find a business t... Read more

Sprinkler Systems: The Most Effective Solution for Protecting People and Property from Fire

Fire is a real threat to both residential and commercial structures. In fact, fire and rescue services attended to ... Read more